If you’re a child of the ’70s or ’80s, chances are you have at least one Star Wars memory you treasure, if not dozens and dozens of them.

A trio of (at least sort-of) grown-up fans of sci-fi’s greatest space opera were generous enough to share a few of their favorite memories, immortalized through the magic of childhood photos.

Below, they take us back to what it was like to be a kid, crazy for Star Wars.

Above, Jacob Patterson sits in the cockpit of his father’s amazing creation.

“When I was about three or four and living in the Bay Area, my father was working as a carpenter and built us a snowspeeder out of wood and a discarded salad bar sneeze guard,” Patterson said.

Jacob Patterson lives in Gig Harbor, Wash., with his wife Stephanie. He listens to a myriad of Star Wars podcasts while working in the Hoth-like conditions of the Walmart dairy cooler. He and Stephanie are counting down the days to The Force Awakens on their Star Wars advent calendar. 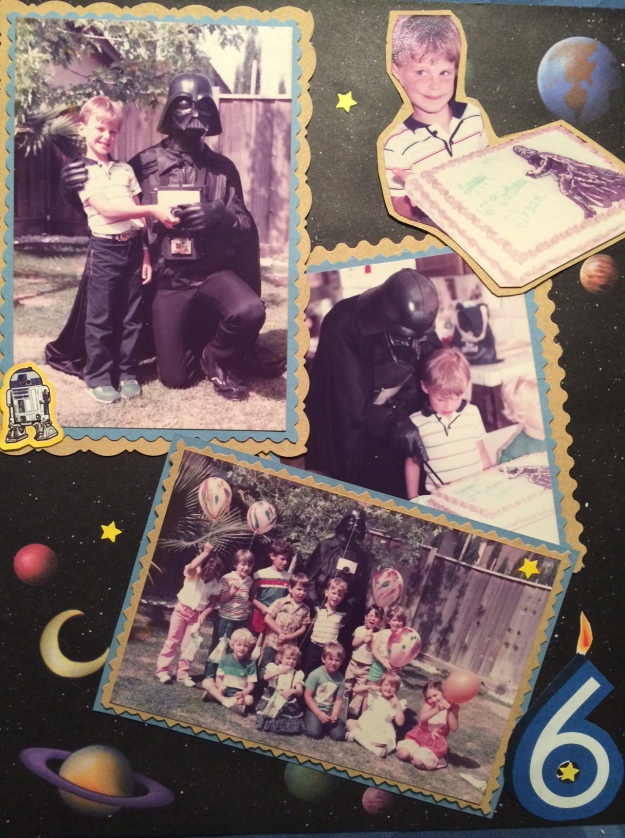 Shaun Griffith sent over these scrapbook pages of his memorable sixth birthday party.

He had this to say about the Vader impersonator who made an appearance:

“He had a flat tire and was running late. I’ve been told he was a short Vader but he was still taller than me. I made sure to call him Lord Vader. Respect. That’s me when I answered the door. Dig the Ewok invitation and the Vader cake. Circa June 1984.

Shaun Griffith is a California native and a Hayward farmer (non-moisture) who went south to become a Santa Barbara Gaucho with a degree in film. He is married to an LBC princess with a sci-fi allergy. He works as an eCommerce Ops manager for a company with conference rooms named Ewok and Chewbacca and presently resides in the Bay of the Half Moon.

Eric Schoen of Woodland Hills has the following explanation for the cute Christmas photo above.

“I think it’s probably ’83 and I’m 8. Rocking those Return of the Jedi PJs so hard, that not only have I tucked the top into the way-too-high bottoms, but it appears I’m in the middle of tucking the bottoms into my socks. Back off ladies, I’m taken.”

Eric Schoen was born in 1975, and was just a bit too young to see Star Wars during it’s first run, but thanks to the ‘Story of Star Wars’ 2-record set and his 12-year-old uncle, he had the whole movie memorized by the time he got to see it in it’s ’78 re-release.

If he could sneak into the backyard of his childhood home, he’d probably be able to dig up several hundred dollars’ worth of figures that bit it in a trench during one of many Hoth battle reenactments. It never snowed in Reseda, but he found a gallon-sized container of powdered chalk in the garage that looked like snow.

Unless that wasn’t chalk … which would explain why he forgets most of the ’80s. And why DOES he have memories of liking those made-for-TV Ewok movies?