“Amal is a human rights lawyer who worked on the Enron case, was an advisor to Kofi Annan regarding Syria, and was elected to a three-person U.N. commission investigating rules of war violations in the Gaza Strip. So tonight, her husband is getting a lifetime achievement award.”

As you may recall, Alamuddin’s hubby was also the butt of a priceless gag last year by Fey and Poehler, who described the movie “Gravity” as “the story of how George Clooney would rather float away into space and die than spend one more minute with a woman his own age.”

As one of Hollywood’s biggest, most beloved stars and, until recently, a confirmed bachelor with a taste for younger women, George is an easy target. Despite the fact that he’s celebrated as a humanitarian, perhaps his save-the-world credentials aren’t as impressive as his spouse’s.

But watching all those film clips during the Globes lifetime achievement presentation reminded me what a formidable actor he is — one who turned a hunky stint on “ER” into a remarkable, versatile, risk-taking career.

Equally adept at comedy, caper films and classy dramas, this is a guy who has made good choices about the movies he’s appeared in, with a few exceptions, of course. (Can he ever be forgiven for “Batman & Robin”? I don’t know. And honestly, “Monuments Men” wasn’t that bad, despite everyone’s constant ribbing about it.)

In recognition of George’s stellar career, here are 10 of his most memorable film roles. 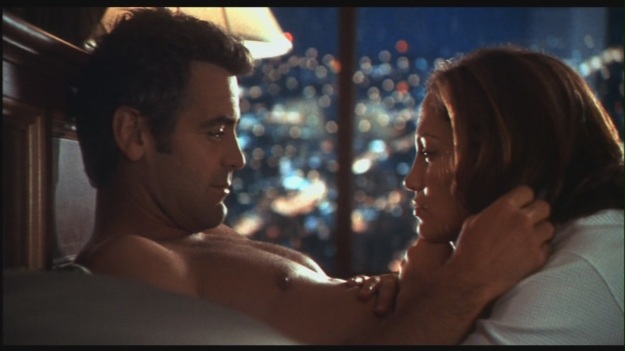 1. “Out of Sight,” 1998: Clooney’s famous charm is on full display as a smooth criminal in this underrated but slick Elmore Leonard adaptation. The actor shares an unlikely yet smoking hot chemistry with Jennifer Lopez as a U.S. Marshal who can’t resist him.

2. “Three Kings,” 1999: As a jaded Special Forces soldier in director David O. Russell’s satire of the Persian Gulf War, the actor indulges his passion for politics while showcasing his talent for irreverent humor.

3. “O, Brother, Where Art Thou?,” 2000: Dim-witted isn’t a quality you’d typically associate with Clooney, but the actor succeeds brilliantly in portraying a scheming prison escapee who isn’t as bright as he thinks he is in the Coen Brothers’ absurd take on “The Odyssey.”

4. “Ocean’s Eleven,” 2001: Clooney’s penchant for playing suave con artists — not to mention his generous leadership of ensemble casts — reaches its apex with the role of casino-swindling ringleader Danny Ocean in this playful remake.

5. “Good Night, and Good Luck,” 2005: After a rocky start to his directorial career with 2002’s “Confessions of a Dangerous Mind,” Clooney forges a place for himself, and partner Grant Heslov, behind the camera with this biopic of First Amendment champion Edward R. Murrow (David Straitharn). He reserves the memorable role of CBS president Fred Friendly for himself.

6. “Michael Clayton,” 2007: Clooney may have won his first Oscar for his supporting role in 2005’s “Syriana,” but he should have taken home the trophy for this wrenching drama about a law firm fixer suffering from moral qualms. The film’s final shot, one long, unbroken take focusing on the actor’s face, reveals his gift for subtle expressiveness.

7. “Up in the Air,” 2009: In the role of a seasoned traveler who makes an unsavory living by firing people, Clooney’s sometimes smarmy smile proves an invaluable asset. As his romance with a fellow frequent flyer (Vera Farmiga) melts his character’s heart, George quietly succeeds in breaking ours.

8. “Fantastic Mr. Fox,” 2009: Unlike a lot of A-list actors, Clooney has mostly steered clear of voiceover work, but he made an exception for Wes Anderson’s stop-motion animal fable. He’s perfectly cast as a rapscallion of a carnivore/family man who moonlights as a chicken thief.

9. “The American,” 2010: Director Anton Corbijn’s thriller about a tormented assassin on the lamb in Italy didn’t receive a lot of attention, probably because of its extremely slow pace. But the film contains one of Clooney’s most internal and intriguing roles. In a film with little dialogue, the actor’s face almost solely communicates everything we need to know.

10. “The Descendants,” 2011: Clooney took home a much deserved second Oscar for perhaps his most unattractive role to date in Alexander Payne’s exquisitely awkward tragicomedy. Playing a clueless, cuckolded, grieving husband whose idyllic Hawaiian life is shattered by a family tragedy, the actor delivers one of his deepest performances and one of his best scenes — a heart-rending goodbye speech to his character’s comatose wife.