EDITOR’S NOTE: This post explores the new Star Wars Launch Bay at the Disneyland theme park. Tomorrow, we’ll take a look at more of the Season of the Force at Disneyland.

SPOILER ALERT: If you’re planning to visit Disneyland and want to be surprised when you experience Star Wars: Season of the Force, you may want to skip this post for now.

When did Darth Vader become so cuddly?

The towering, black-cloaked, mask-wearing, James Earl Jones-voiced, half-man, half-machine was once an object of terror. When I first saw “Episode IV — A New Hope,” I was genuinely awestruck and horrified by Star Wars’ ultimate villain.

There he was striding down the corridors of the Death Star, Force choking underlings who looked at him the wrong way, torturing Princess Leia with pointy, needly things, ordering the annihilation of entire planets, wielding that eerie red lightsaber, chopping off Luke’s hand! He was a fearsome sight to behold. And the now infamous sound of his breathing left us quaking in our boots.

And then something changed. Darth Vader became a comical figure — a clown, a joke, an object of laughter not fear. 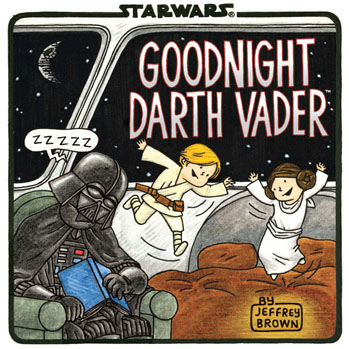 Now, he’s the star of children’s books, like “Darth Vader and Son” and “Goodnight Darth Vader.” He’s the subject of memes and comic strips. He’s a bobblehead. He’s a plush doll. He’s a Lego minifigure.

He eats ice cream. He rides roller coasters. He’s the harried parent of toddlers. He rolls his eyes at his Death Star minions like the grumpy CEO of an average corporation.

As a villain, Darth Vader has been rendered utterly benign, which is why I was surprised at my reaction when I met the Dark Lord himself last weekend at one of Disneyland’s Star Wars: Season of the Force events.

My sister and I went to check out the Imperial Meet ‘N’ Greet, which is open from 4 to 8 p.m. daily for Disney Visa card holders.

Greeted by a long line, we took a tip from a Disneyland cast member and returned later. And there was NO ONE THERE. Literally NO ONE. Just us, Lord Vader and a bored-looking photographer.

This particular Vader was tall and surprisingly intimidating. He breathed his nefarious breaths, wagged his finger at us and scolded us for holding to the philosophies of the Rebel Alliance.

I’m not proud of my response. I cowered before the Dark Lord of the Sith. I laughed nervously. I froze. Then I squeaked, “Thank you, Lord Vader,” and made a beeline for it.

Was this the resurfacing of some latent childhood fear? Or am I just a total dork?

Anyway, here we are, cowering before Darth Vader. 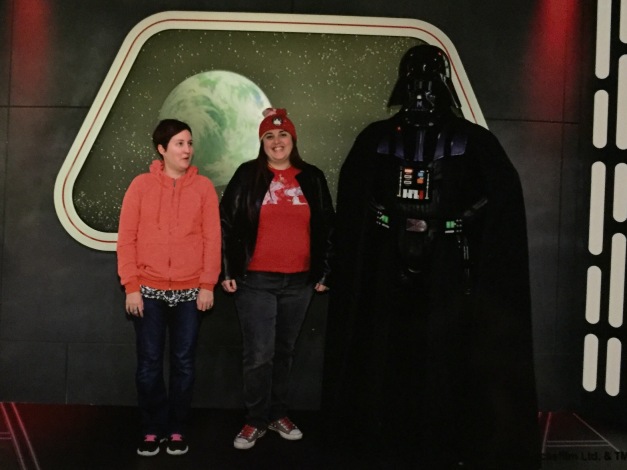 The Imperial Meet ‘N’ Greet takes place inside Disneyland’s new Star Wars Launch Bay, the center of the action at the theme park’s Season of the Force.

(If you are a Disney Visa card holder, the meet ‘n’ greet is worth checking out. You get a voucher for one free 5 by 7 photo)

Season of the Force is a lineup of attractions, “character experiences,” themed food and merchandise galore meant to tide us over until Disney finishes construction of its much ballyhooed new Star Wars Land.

The Star Wars Launch Bay is on the first floor of the former Innoventions (which was once America Sings, and, before that, Walt Disney’s Carousel of Progress). The second floor is still home to Disney’s Marvel superheroes. 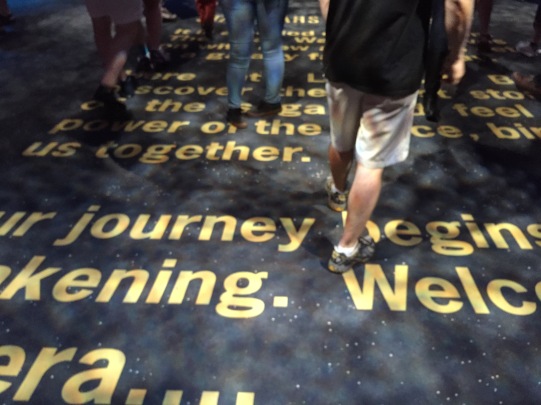 When you walk through the doors — designed to look like the Star Wars blast doors, naturally — you are greeted by a special opening carpet crawl. To the right, a short film features the filmmakers behind “The Force Awakens,” discussing the impact of George Lucas’ original trilogy. 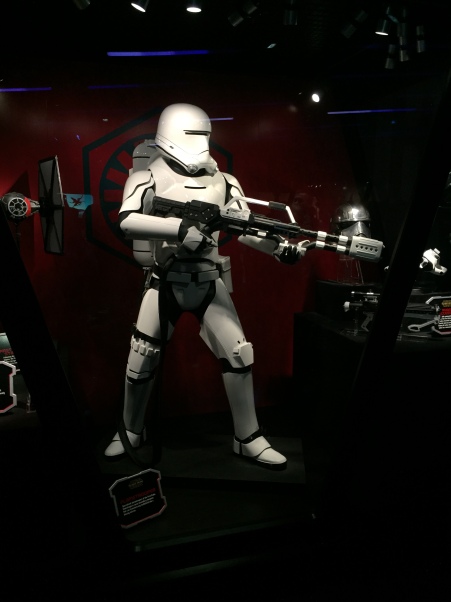 The Star Wars Launch Bay features several themed galleries, displaying props, costumes, ships, models and other items from all the films in the franchise, like this Stormtrooper with flame thrower from “The Force Awakens.” 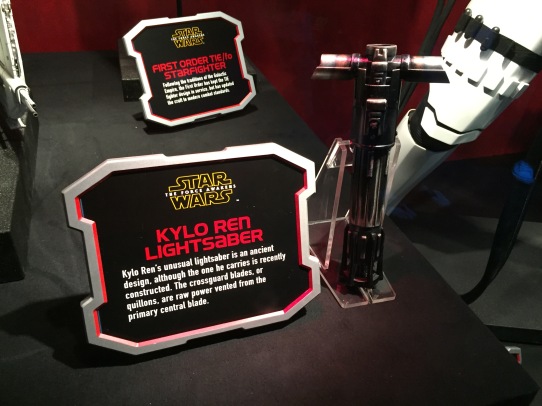 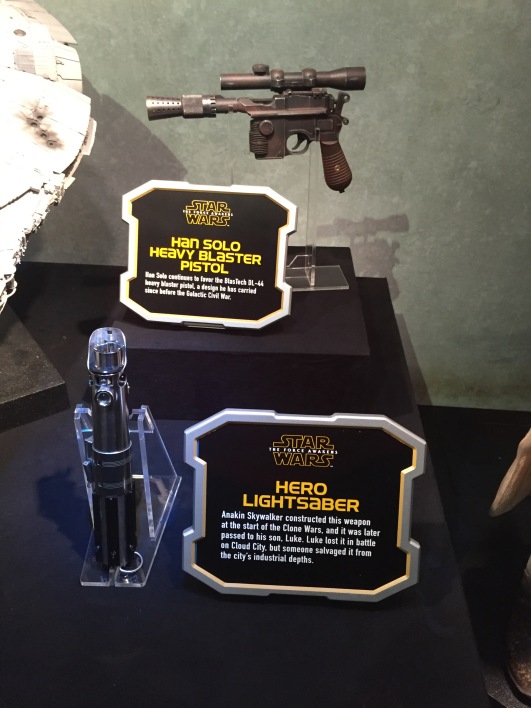 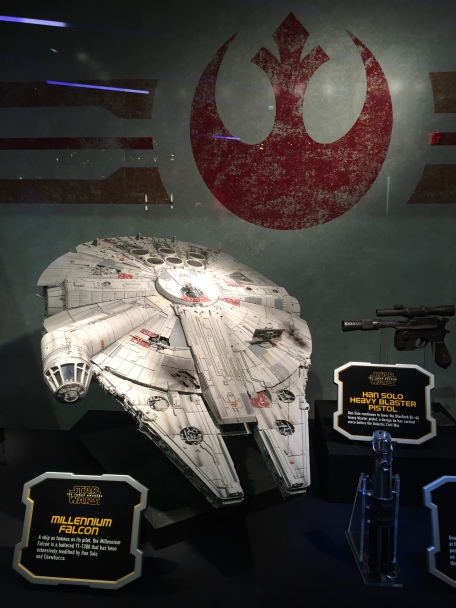 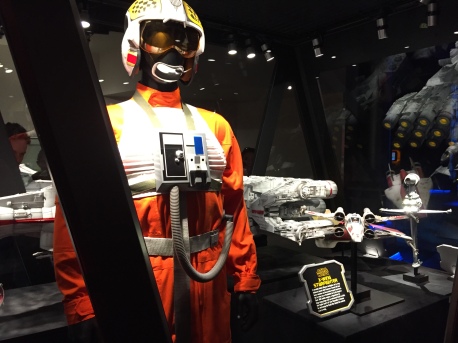 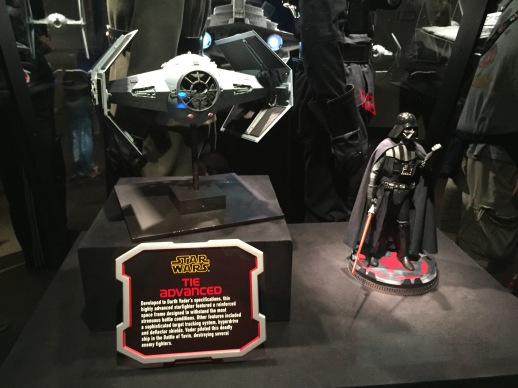 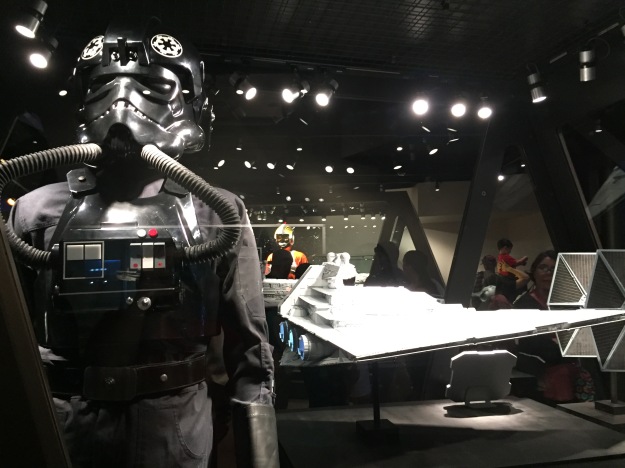 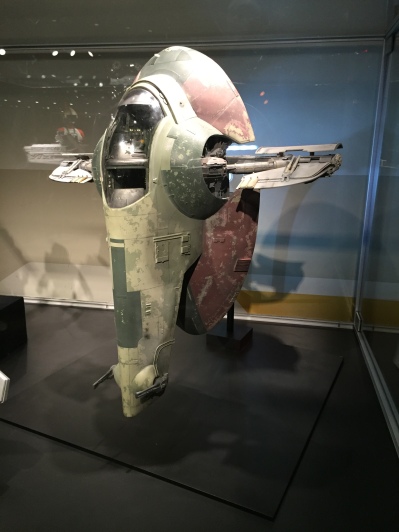 A highlight of the Launch Bay is a large replica of the Mos Eisley Cantina, complete with bar for photo opps. Assorted aliens not included. 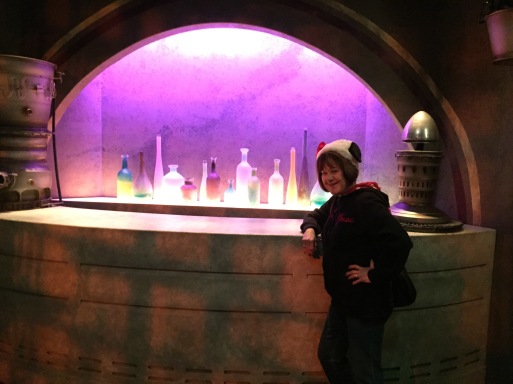 Mom, bellying up to the Mos Eisley Cantina bar. 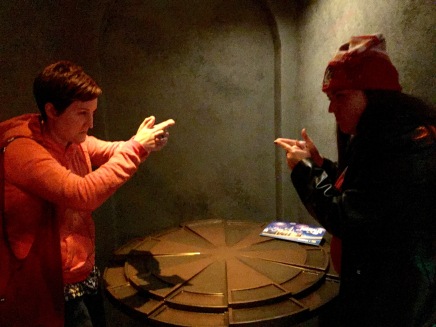 Lavender Vroman and Fawn Kemble settle the matter of whether Han shot first. 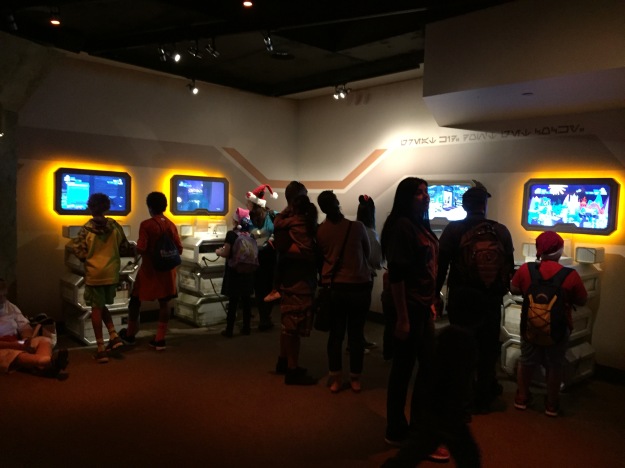 In the Star Wars Game Center, you can try out the latest tech from the franchise galaxy, including Disney Infinity 3.0. 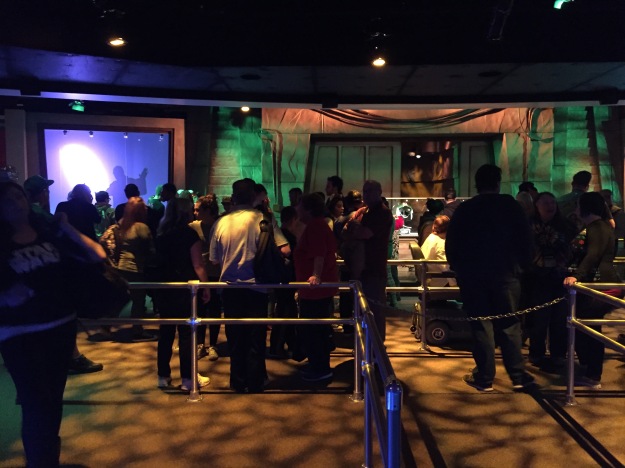 The Launch Bay also includes “character experiences.” Chewbacca was holding court in the area above. There was quite a line of fans waiting to meet the furry Wookie. 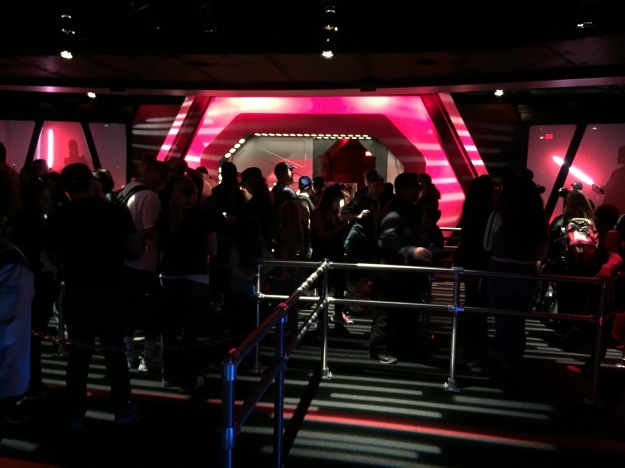 Above, another line forms to visit with Darth Vader. 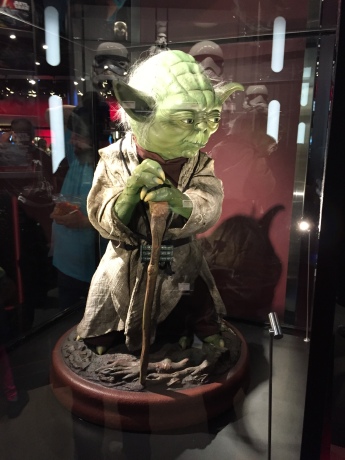 Of course, you can’t exit the Launch Bay without passing through a gift shop, this one filled with high-end merchandise, like this $3,000 model of Yoda. 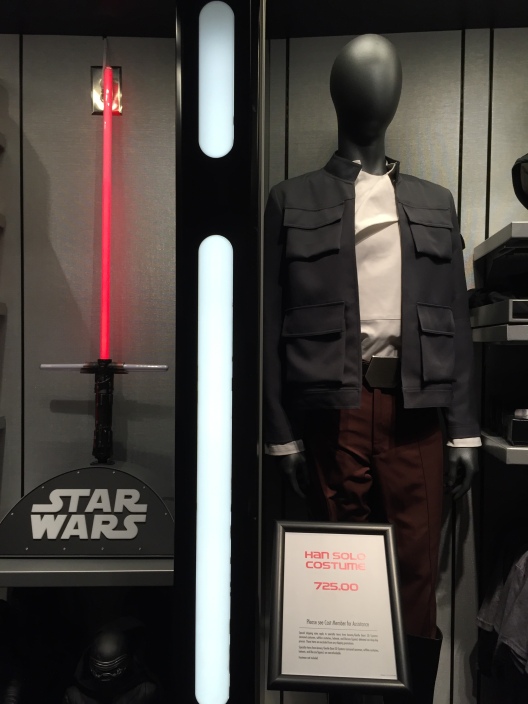 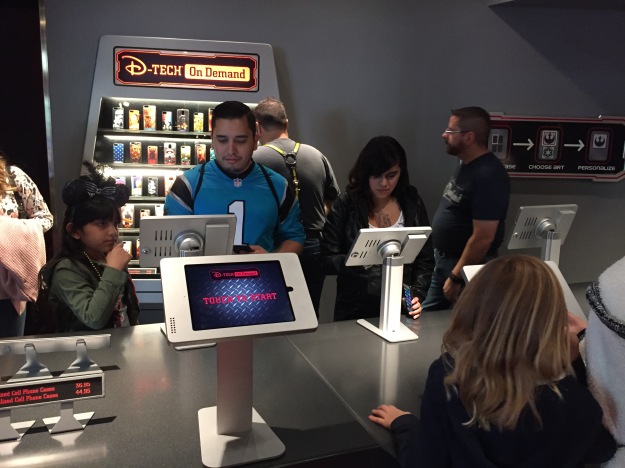 The shop features a station where you can design your own Star Wars-themed cellphone case. 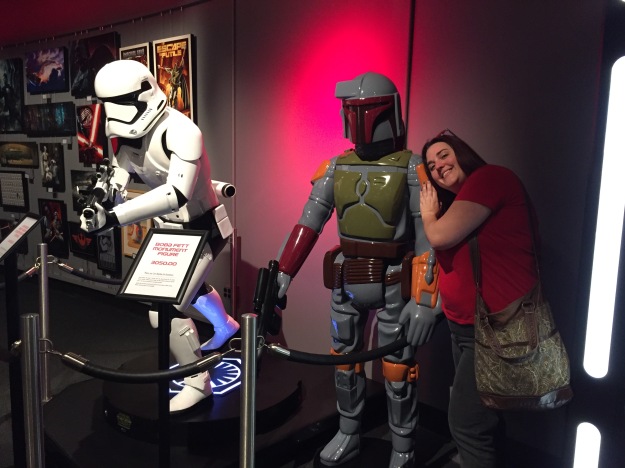 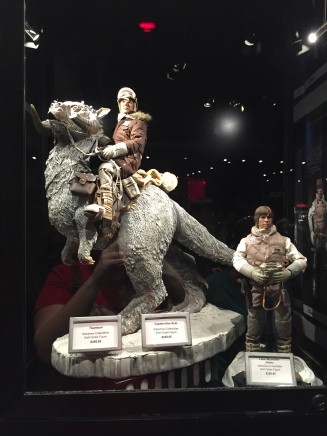 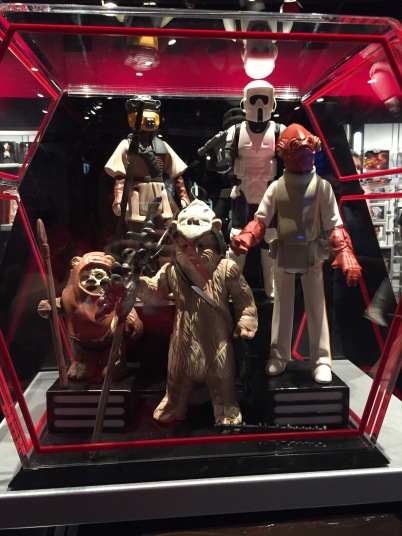 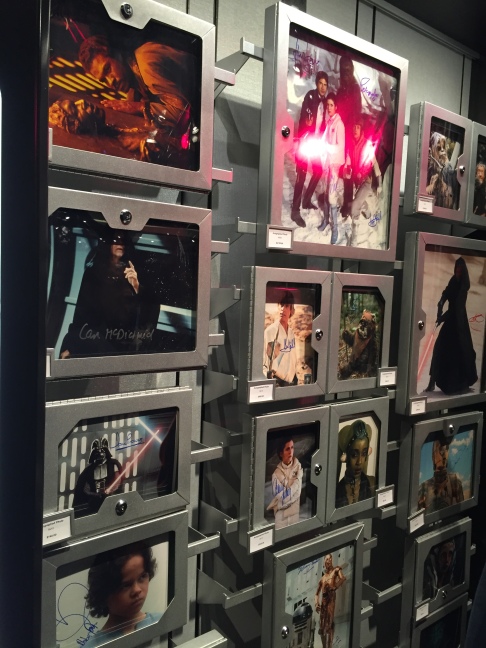 There’s an entire wall covered with autographed photos for sale. 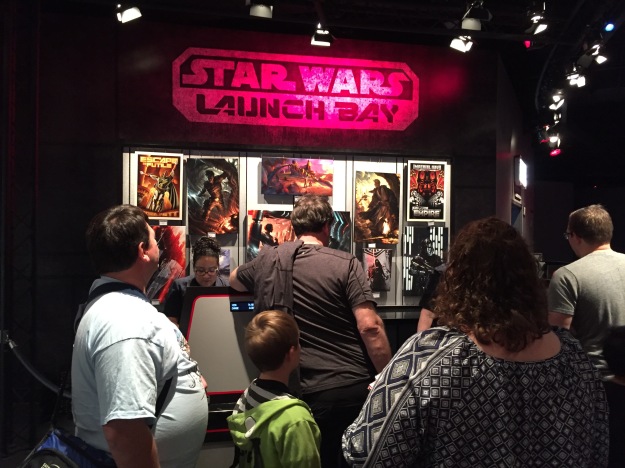 There’s also a lot of cool art on display, all available to purchase. 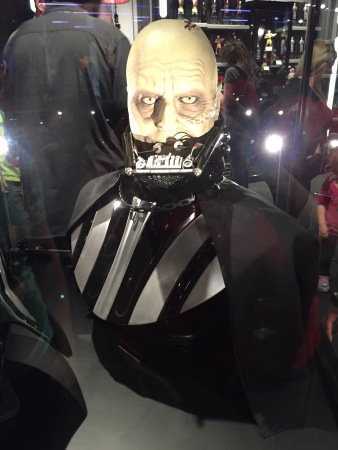 Wouldn’t this make a great conversation piece for your living room? 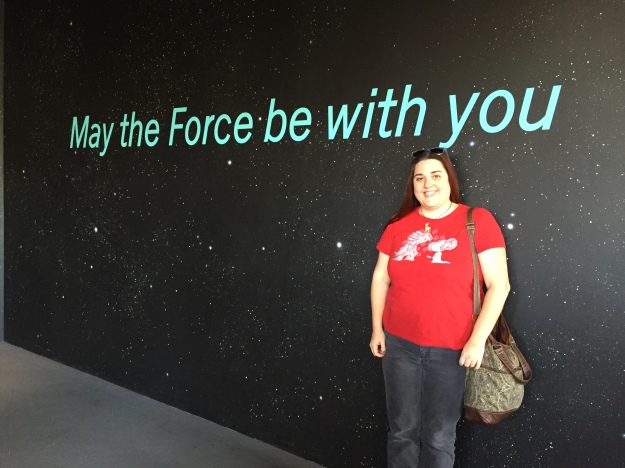 One final photo opp after you emerge from Star Wars heaven, back into the real the world.