The Oscars may be so white — as the hashtag declares — but that doesn’t mean the Academy isn’t capable of change.

Hollywood’s most beloved awards institution may have a long way to go where race is concerned, but judging by this year’s best picture nominees, they’re taking some strides, or at least baby steps, whether in embracing a groundbreaking action flick with a bold feminist perspective or hinting they may finally be ready to give Leo that damn Oscar he’s been waiting for since 1994.

All joking aside — I plan to discuss the controversy over race in a separate post this week — the 88th Academy Awards promise to be unpredictable, if not exactly radical or revolutionary. (The ceremony and its accompanying coverage are set to begin at 4 p.m. Sunday on ABC.)

Below, I discuss the remaining four nominees for the best picture Oscar. May the best flick win.

For a look at the other four nominees, check out my previous post. 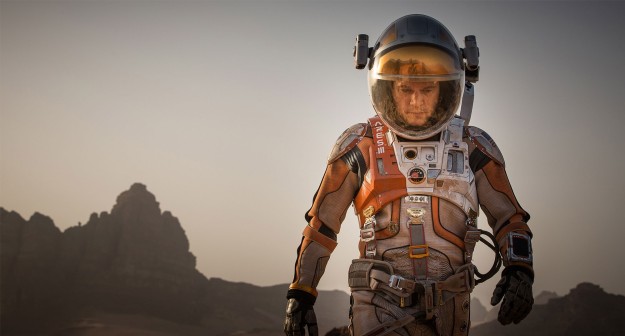 If the Oscars were voted by the people, there’s no doubt sci-fi dramedy “The Martian” would capture the best picture prize.

As crowd-pleasers go, the film is a doozy, grossing nearly $620 million worldwide after multiple No. 1 stints at the box office. Everybody wanted to see it. Everybody was talking about it.

At the Golden Globes, “The Martian” landed trophies for best pic in the comedy or musical category — in a bit of clever but odd positioning — and best actor for Matt Damon, also in the comedy category.

Those achievements aside, the movie seems destined to lose on Oscar night to a flick with more gravitas, say “The Revenant,” which is a little ironic for a film about the triumph of the human spirit against the most impossible odds.

Perhaps “The Martian” is easy to dismiss because of its lightness of tone, the way snubbed director Ridley Scott deftly blends humor, intensity and intelligence to portray the ordeal of an astronaut stranded millions of miles from Earth.

Not only does “The Martian” boast impressive visual effects — it’s nominated in that category as well as six others — it makes science look sexy in a way that few movies do. NASA and JPL have never appeared more hip or more glamorous, especially when staffed by the likes of Kristen Wiig, Jeff Daniels, Sean Bean and Chiwetel Ejiofor.

If we’re being honest, “Ex Machina” was the more original, stylish and haunting science-fiction offering of 2015. That said, while several of this year’s best picture nominees work hard to subject their audiences to vicarious tribulation, “The Martian” strives to do nothing more than uplift and entertain.

In a world where cynicism often reigns, that’s no small accomplishment. 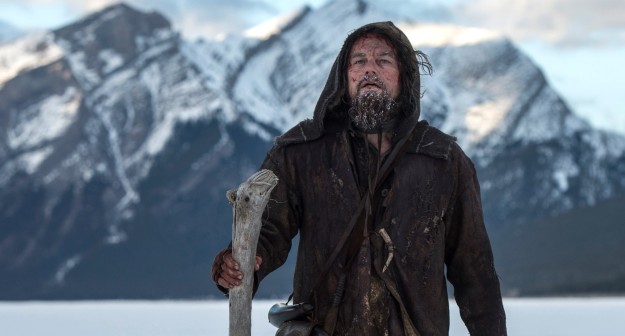 Here is why “The Revenant” is almost certainly going to beat “The Martian” and every other film competing for best picture in this year’s Oscar race.

As the only man on Mars, Matt Damon’s stranded astronaut subsists on nothing but potatoes grown from his own manure and figures out some complicated math equations with nothing but terrible disco music and a video log to entertain him.

But compare his hardships to the travails of Leonardo DiCaprio’s strapping fur trapper, Hugh Glass.

In “The Revenant,” Hugh is attacked by vengeful Native Americans, mauled by a raging mama bear, left for dead by his own men, buried alive, forced to cauterize his own wound with gun powder, swims through freezing rapids wearing a massive fur coat, jumps over a cliff on horseback, and then crawls into the animal’s oozing carcass for warmth. (And because said horse carcass was filmed by director Alejandro Gonzalez Inarritu and master cinematographer Emmanual Lubezki, this scene looks like a painting you’d find hanging on the wall of a national gallery.)

On top of all this, Inarritu and his crew endured their own severe trials while filming “The Revenant,” shooting in freezing temperatures with natural light in the wilds of Canada. People almost died! The Academy can’t resist a story like that.

So that is why “The Revenant” is nominated for 12 Oscars, including best director, cinematography, editing, costume design and visual effects, not to mention best actor for DiCaprio and best supporting actor for Tom Hardy, who co-stars as Glass’ scalped and scheming nemesis.

And that is why “The Revenant” won best picture in the drama category at the Golden Globes while Inarritu picked up a trophy for best director. (The film also seized the top prize in other major contests, including the Directors Guild Awards and the BAFTAs.)

That is also why it will finally be Leo’s year after four slights by the Academy in the past. It’s fitting because DiCaprio’s performance in “The Revenant” is like nothing he’s done before, largely silent, deeply physical, with a great, grizzly beard to cover up all that boyish charm.

Yep, it’s the beard that finally did it. 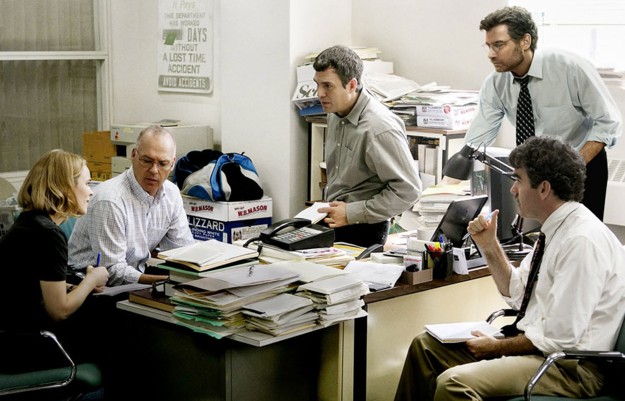 As a journalist, I can’t help but feel an overwhelming affection for “Spotlight.”

The movie is a slow-burning but suspenseful look at how the Boston Globe’s special investigative team uncovered the scope of the Catholic church’s sexual abuse scandal in the early 2000s, eventually winning a Pulitzer Prize for their reporting.

Directed by writer and character actor Tom McCarthy, “Spotlight” is a disciplined, elegant, old fashioned morality tale in the vein of the iconic “All the President’s Men.” It’s a film that inspires outrage, sorrow, and ultimately hope, but it also happens to perfectly capture a fleeting, not-so-distant era in print journalism.

The events of “Spotlight” begin in 2001, only a few years after I began my career at a local newspaper. The movie sent me flashing back to those glory days of print, shortly before the entire industry imploded. From the demeanor of the reporters, to the clothes they wear, to the look of the newsroom, this film is just like being there.

Those days may be long gone, but I love how “Spotlight” champions thorough, thoughtful, brave reporting, the kind of careful, indispensable journalism that has mostly vanished since the rise of the speedy, sensational, soundbite-ready era of social media. At the same time, the movie is honest enough to acknowledge the limitations of the press.

“Spotlight” features a remarkable ensemble of actors working as a team, just as their characters do in the film, to reveal and clarify a scandal so shocking, sprawling and shrouded in secrecy it was almost impossible to fully grasp at the time of its unfolding.

Liev Schreiber as the new editor — not to mention a Jewish one in a predominantly Catholic town — who pushes his staff to pursue truth at all costs. Michael Keaton as the tenacious but cautious leader of the Spotlight team. Any one of the actors in “Spotlight” could have easily scored nominations.

Rachel McAdams and Mark Ruffalo are the ones the Academy chose to vie for Oscar votes in the best supporting actress and actor categories. Their performances are remarkable, at the very least because they reminded me of some of the fine, dedicated newspaper reporters I used to work with.

“Spotlight” isn’t just a showcase for some truly commendable acting. It’s also a sober recognition of the victims who came forward to expose the church’s abuse, an absorbing procedural detailing the ins and outs of the investigative process, and a gripping reminder of the limitless potential for corruption when power goes unchecked.

“Mad Max: Fury Road” is everything an action buff could ever want in an action movie. But it is also much more than that.

This sequel/reboot/whatever-the-heck-it-is to 1979 post-apocalyptic classic “Mad Max” is groundbreaking in every way, from its technical innovations, to its surreal but immersive fantasy world, to its unprecedented feminist point of view.

No other movie in 2015 thrilled me, captured my imagination and stayed with me like “Fury Road” did. It was hands-down my favorite cinematic experience of the year.

Here’s what I said about it when I included it in my Top 5 list:

“Part environmental fable, part feminist fever dream and 150% high-octane action extravaganza, this irresistible rush of a flick pairs Tom Hardy’s taciturn Max with one of the most bad-ass heroines of all time — Furiosa, a bald, one-armed truck driver played by Charlize Theron in a blend of toughness and true emotion.

“With its tribal-punk-rock-scrapyard-demolition-derby aesthetic, ‘Fury Road’ is a movie of primitive, streamlined power. It’s ferociously bleak and violent but also — dare I say it? — quite lovely.”

The fact that “Fury Road” was nominated for best picture, not to mention nine other trophies, is groundbreaking in itself and virtually unprecedented. For whatever reason, the Academy has been quick to snub action films, especially those with fantasy or science-fiction elements.

We fans of the genre know better though, that action movies can be just as thought-provoking, artful and compelling as weighty dramas, lavish period pieces or nimble comedies.

Because of Oscar’s long-held bias, “Fury Road” isn’t likely to claim the night’s top prize, but its very presence in the ceremony could herald a welcome, overdue shift in the Academy’s thinking.