EDITOR’S NOTE: The recent release of the video game Star Wars Battlefront left at least one fan pining for Knights of the Old Republic and a memorable villain who is no longer canon.

A long time ago on a couch far far away …

I was introduced to Darth Revan, the most awesome character from the Star Wars Extended Universe that you have most likely never heard of.

It was a month after my sci-fi loving and brilliant movie critic wife, Lavender, and I were married in June 2003 that my favorite Star Wars video game was released, which consequently sparked a love affair with the dark side of the Star Wars universe

Or as Lavender would put it, the universe that is not canon and therefore does not exist. She has flown from one side of this galaxy to the other. She has seen a lot of strange stuff, but she never has seen anything to make her want to believe in Anakin Solo, a living Boba Fett, or the Emperor’s clones. 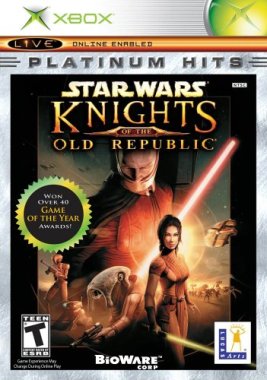 Darth Revan’s story brilliantly unfolds in Star Wars: Knights of the Old Republic. It was developed by Bioware and published by LucasArts. Bioware has cultivated a reputation for crafting immersive and compelling role-playing games over the years with critically acclaimed titles such as the Dragon Age and Mass Effect series.

Knights of the Old Republic may have slightly outdated graphics now but the story is still my favorite of Bioware’s epics and its blue prints can be seen in the company’s follow-up ventures.

If you have not heard of Darth Revan, you are missing out on an epic tale set 4,000 years prior to the rise of the infamous Darth Vader and his heroic progeny that so impacted the Force. Darth Revan’s story is no less Shakespearean in scope and stays true to the struggle between the light and dark sides of the force in a time when there was more than just master and apprentice. It even features possible redemption for a fallen hero, revealed by a jawa-dropping plot twist.

Darth Revan’s story is a must for fans of the extended universe and role-playing video games alike. When the shine of battling on-line gamers in repetitive warfare wears off, pick up this masterful, story driven adventure and find out for yourself about the legacy of Darth Revan.

Nick Vroman is the Salacious Crumb to Lavender’s Jabba the Hutt. He is way too old to still be playing video games but clings to them like a force ghost to Dagobah. When he is not playing video games in the dead of night, he can be found teaching a high school special education class. He is father to an aspiring Jedi princess.