I, my husband and my family hold back tears of unbearable grief with each new announcement heralding the long-awaited release of “The Force Awakens.”

We can think only of the one who is not here to watch it with us. The one who we know would love the experience the most. The one who was, in my world, the “other Skywalker.” My brother.

Paul was an epic fanboy of the caliber that is often joked about in nerd culture, but is actually reached by very few. The kind who could just as easily quote Star Wars, Star Trek or Tolkien to students in his classes as an English professor, as he could top-rank in “Magic: The Gathering” tournaments in the gaming Mecca of San Jose. The kind who could just as easily joke with friends about the most obscure story arcs of the most obscure comic book characters, as he could compose and deliver professional academic whitepapers on their literary cultural significance. Everyone he knew loved him. 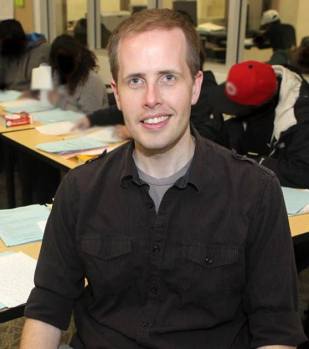 He was 33 when he died last June of an extremely rare form of mucosal melanoma, eight months after his diagnosis and the unimaginable pain and agony that followed. It simply does not seem possible that his battle is over. I still cannot understand it.

When we were young, in a youthful Skywalker-like naiveté, and a very similar alien isolation in the Mojave Desert, I never realized how much my brother, his life, his experiences, his hopes and dreams, were vital to the very predication of my own, until he was gone.

As Gen Y-ers well know, the shared experiences we grew up with –- largely shaped by film, TV, and other pop culture watched in our parents’ family rooms –- has become not only our shared self-referential language, but a means by which we continue to understand and interpret the rest of the world. Art speaks truth, now more than ever.

And a cinematic touchstone like Star Wars is of a defining magnitude in Western life experience. It’s a critical piece of cultural literacy -– one that infinitely informs pop culture, archetypal artistic references, and in-jokes that define relationships. I’ve always thought the story is in fact SO BIG because of the deep tribute it pays to a global awareness of the mythological concepts it imitates.

So when a piece of your life is so formative, your memories of it are colored by who experienced it with you. For me, that was always Paul. I don’t have any memories of a life before he came along. 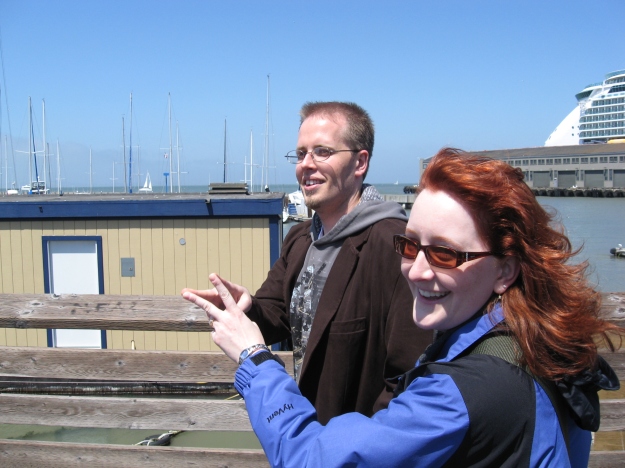 Brenna Humann and her brother, Paul.

And for geeks like us, those companions who’ve always been with you, in the back of your mind, also includes icons like those of Star Wars. Have you ever noticed how deeply neo-Platonic dualism runs in George Lucas’ plot lines? The character dyads abound. Obi-Wan and Vader. Han and Chewie. R2-D2 and C-3PO. Luke and Leia. There are always two.

Lucas’ brand of mythic dualism was never more vividly real for me than when I felt the loss of my own other half –- no one shares more of your life experiences than a sibling does. And Star Wars will forever be defined for me by my brother. By the Mos Eisley Cantina poster in his room. By his extensive Boba Fett collection. By the endless speculative conversations we shared as rumors of the prequels and sequels first began when we were teenagers.

I remember having so many arguments with my brother and my husband, both devoted fanboys, that the Star Wars prequels were, in fact, dreadfully terrible films. A realization they were of course reticent to make, in their faithful enthusiasm for the revival. But one they nonetheless regretfully conceded, as they floundered in the wake of total narrative disaster left by Jar Jar Binks, Midi-chlorians, and other epic flaws. And I did gloat.

Another point of discussion was one of the sharpest criticisms against Lucas’ writing — his unapologetic outright thievery from world myth and religion in his storytelling, making in some cases very little attempt to recloak whole storylines in a fabric more appropriate to the Star Wars tapestry. I remember the look of shock on my brother’s face when I explained that one of the biggest reasons I couldn’t stand this linguistic laziness in the prequels was the naming of the Skywalker mother as “Padmé.”

Taking college classes at the time on world religions, I had to break it to him that the word “padme” means “lotus” or “yoni” in Sanskrit — read: Vagina.

“Really George Lucas, your name for a classic mother figure is… Vagina?” went the conversation. Talk about female objectification. Natalie Portman did what she could to bring substance to the good Senator from Naboo, but the Mary Sue named “Vagina” dying of a broken heart in childbirth? Honestly. Classic female fridging, with an even frostier layer of gender objectification, in my opinion.

Then there was the time Paul told us that, in his graduate work in creative writing, another (female) student had been assigned to peer review a poem he wrote. She returned it with a graphic picture drawn over his text, as her commentary –- one of those “only in college” moments. He then returned her work with a picture of the Sarlacc Pit monster drawn on top, complete with hovercraft, gangplank and scrambling stormtroopers. A priceless play on vagina dentata myth.

My brother and I liked to joke that, in our –- often called “useless” -– humanities majors, we were “classically trained” in world myth and iconography. He took his fascination into a creative writing degree, attempting to find as he said, a “major in comic books.”

He succeeded, basing his curriculum as an English professor on selections from “The Watchmen,” “The Sandman” and “The Dark Knight Returns.” I took mine into a philosophy degree, which I have not used since, other than to marvel at the exceptional lack of logical rhetoric in American society.

But he always called me to ask my thoughts on his course content, the logic of certain rhetorical usages, or the history behind classic cultural representations. And I always called him to ask what the hell to do with my life.

He had a remarkable, Jedi-like way of seeing through to the core motivations of a person, and being able to communicate with virtually anyone, that I have never possessed. And one which I fear I will never hear the wisdom of again in this life.

Each jaw-dropping Star Wars trailer image I see, or soul-stirring refrain I hear from that epic score we all know so well, is a stabbing, breath-stealing pang of sorrow.

The prospect of what secrets and adventure lay ahead on the screen looms hollow. Like a gaping desert Sarlacc Pit, but with the heart-stopping battle on the gangplank already lost.

I hope, as said by Boba Fett in the ignominious Star Wars Holiday Special, that “We’ll meet again.” I miss him. 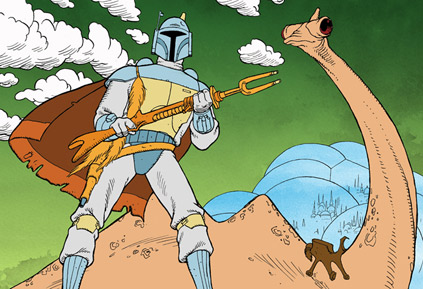 Brenna Humann was born and raised in the Antelope Valley, an alumna of California public education from preschool to university. She has worked as a journalist, nonprofit manager, and grantwriter, and remains an avid student of world religion and culture. Though her late brother Paul was strong in the force, with a power she did not understand and could never have, he has now become more powerful than anyone could possibly imagine. For her part, she prefers not to believe in no-win scenarios.