When director Zach Braff needed aerial shots for his sophomore film, “Wish I Was Here,” he called upon a team of cinematographers who specialize in cutting-edge technology, even though what they do isn’t strictly legal.

For “Wish I Was Here,” Petersen harnessed himself to the back of a pick-up truck, piloting a drone as he raced just ahead of it for a series of driving shots on a long desert road near Lancaster, California.

“I was strapped in … flying from the back of the truck, almost surfing in a way,” he said. “We were basically chasing the picture car. I skateboard and surf a lot so the balance factor is easy for me.”

This unconventional technique made it possible for Petersen to keep up with the copter he was piloting, allowing him to film the car for a long distance at several different heights.

“If I was standing on the side of the road, I could only fly the copter as far as I could see it,” he said.

While working with Drone Dudes, the actor-director proved open to experimenting in other ways besides crowd-sourcing.

Petersen became involved with the film after receiving a call from one of the producers.

“They probably thought a helicopter would be out of their budget. They were looking for alternative tools to fulfill their shot.”

“It was pretty much one on one,” he said. Braff was “really fun to work with, just getting down in the dirt and drawing different lines in the sand. He was really excited by the tech and I think that was his first experience using the drone.” 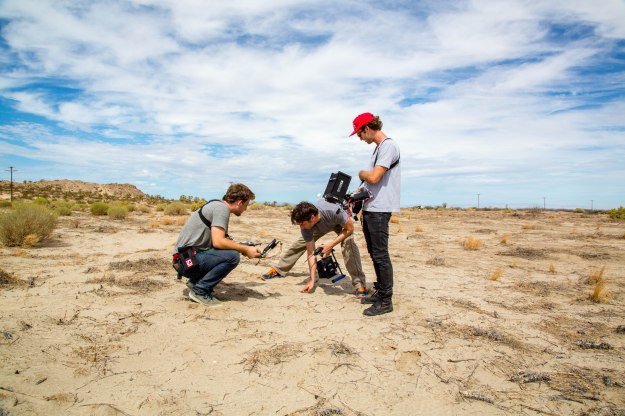 From left, Jeffrey Blank, Zach Braff and Andrew H. Petersen on the set of “Wish I Was Here” in the desert near Lancaster, California.

Drone Dudes’ arsenal of equipment includes about 10 different copters made of carbon fiber. Most of them have eight propellers and they’re “each essentially built around the camera,” Petersen said.

“We’ll find a camera or lens we really like and build a gimbal, which holds the camera. The drones are also outfitted with gyroscopic camera stabilizers, which take “all the shakes out of the picture. If the copter gets blown in one direction, the camera’s not going to get knocked off its target.”

The smaller the drone, the better, according to Petersen.

“We really think the future is with the smaller copters. As the quality of cameras get better and better, we’re able to basically put the copters into unique positions that you wouldn’t put larger copters into.”

Petersen described his company’s drones as a “very versatile tool.”

“It’s actually so flexible, we can take the camera gimbals off the copters and run around with them in our hands,” he said.

While filmmakers working with a dolly, crane or helicopter are often limited by distance and height, “with a drone we can keep going past that 20 foot range (of a dolly) and then we can … lift up to reveal what a crane would do and go even further to what would be like a helicopter.”

The drone “essentially jumps over all of these tools and combines them into one. Not only can you do those really high up kind of shots that look like helicopter shots but you can get really low down to the ground, what you can’t do with a helicopter.”

“Wish I Was Here” was the Drone Dudes’ first major feature film. Petersen said it led to more movie jobs, mostly foreign projects. In the U.S., the use of cinematic drones falls into what the filmmaker describes as a legal gray area.

“At this point, a lot of the big studios and production companies are hesitant to get involved with the use of drones because of this big gray zone we have going on right now and the lack of regulation,” Petersen said.

“There’s no law that’s put forth that says any one way or another. It’s kind of like a new playing field essentially.”

Because of a lack of regulation by the Federal Aviation Administration, Drone Dudes can’t officially obtain film permits for their shoots.

“We’re still not permitting drones,” confirmed Pauline East of the Antelope Valley Film Office, which facilitates film permits for productions on location in the Lancaster-Palmdale area.

“There still hasn’t been regulation written. They’re writing that now for safety.”

When it comes to safety, “obviously were operating within a lot of the FAA recommended operation,” Petersen said, including flying below 400 feet and steering clear of airports and congested areas.

“It is obviously within reason. We’re not flying around people’s homes. We’re typically on private property or a closed set.”

Film studios may be skittish about drones, but commercial work is easier to come by. Drone Dudes have shot ads for such clients as Ford, Chevy, Scion, Nature Valley and Nike.

While commercial projects pay the bills, the Drone Dudes would eventually like to focus on more personal endeavors.

“Being paid to do it is great and all but in the end we want to work on our own projects,” Petersen said.

There’s a reason the Drone Dudes have dubbed themselves “aerial cinematography specialists.”

“We were all filmmakers,” Petersen said. “We had no background in remote control, in anything other than tinkering around as a kid. This was the most dynamic tool for the types of filmmaking that I was most interested in.”

Those interests include action sports, surfing, travel, lifestyle, fashion and the outdoors.

In April, Drone Dudes shot footage for a film about the Coachella music festival.

“We were running all over the stages,” Petersen said. “It was a lot of fun.”

Among upcoming projects, the company plans to use drones to document a Caribbean sailing trip. And they have a YouTube series in the works, devoted to discussions about “future tech and really cool uses for it.”

“We kind of wanna focus on people who are using new tech for creative purposes and we also want to showcase kind of the ins and outs of the Drone Dudes clubhouse … just doing an in depth look at those tools and the way that we are using them out in the field.”

Petersen recalled the early days of Drone Dudes as a frustrating time when information wasn’t readily available. He and Blank taught themselves, mostly using the Internet.

“It was hard learning all that stuff way back then. It wasn’t being done. There was really no one there to tell you how to do it.”

Now Petersen is part of a small but growing community of aerial cinematography pioneers.

“I think a lot of people are interested in flying and have the same dream that I have of one day being able to take flight,” he said.

“I think that’s everybody’s interest. (The drone is) almost like an extension of you in the sky.”

Zach Braff, left, and Jeffrey Blank of Drone Dudes on location for Braff’s sophomore feature, “Wish I Was Here.”